In 2008 Katy Perry released her “I kissed a Girl Song” and it went to the top of the charts.

As a Santa Barbara native, she did all of the local press rounds including the Santa Barbara morning radio shows…which at the time included me.

Yes, before I ran an agency I had a morning show on the radio (Note for millenials: radio is a thing that we used to listen to music on – kind of like a iPhone but with more commercials for Toyota-thons). 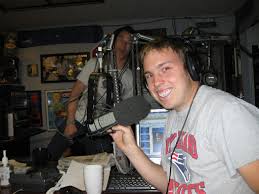 Being a morning show host had always been a dream of mine and it finally came true!

However, I noticed at the time that even with our great interviews we could land as radio hosts that there was more buzz around this new internet thing. Specifically I was hearing a lot about videos and youtube.

2008 was that same year I recorded a video that went viral online -it was one of the first. This viral video landed me on Vh1, Sports Illustrated and the Best Damn Sports Show.

It is also what changed my career path from a hawaiian shirt wearing radio DJ to full fledged digital marketer.

It all started with Sam…

Sam Cassell, that is. Sam Cassell of the Los Angeles Lakers.

To get all the insights, watch the video!

Since I had a successful show on the radio I was able to land interviews with basically anyone who came through Santa Barbara, Ca.

This actually ended up being quite a few famous people. I was able to interview Clint Eastwood at the Santa Barbara Film Festival, Hillary Clinton at her Santa Barbara Rallies and Arnold Schwarzenegger at the Navy club.

I had been a fan of “unconventional” interviewing for a long time with my favorites being Ali G and Stuttering Jon. If you are unfamiliar with these two gentlemen, what they do is ask the worst questions possible and let the awkwardness sink in.

In 2008, the LA Clippers, for reasons still unknown to me, held their summer training at Santa Barbara City College (Go Vaqueros!).

I took this opportunity to drive to city college and interview some of the players.

As I read through my list of (admittedly) awkward questions I recorded audio for my show like I always did – the audio of these interviews always did well in the rating.

However, this time I asked my co-host Spencer to record the video of the interview with a camera I had bought at Circuit City (2008 FTW!).

Step 2: Get a Reality Check by Putting Your Content Out In The World

I wanted the video to go viral, and figured when I posted it to youtube it would just completely blow up.

However, when I posted the video on YouTube it got almost no traffic to it.

Fast forward 2 months and I am sitting there looking at the video views stagnate.

I needed this reality check and I needed to see how it performed in the real world. This isn’t necessarily a bad thing if it doesn’t work initially, it is just information.

This step is often overlooked and it is one of the most important – you have to get your content out in the world. Flawed, ugly, not perfect.

I’m not sure if it was the Corona’s from the night before or the coffee from that morning but something in me snapped. I realized if I want to make this video go viral, then I have to do it myself.

You see I had a great product that no one was consuming.

If you have a business, you can probably relate.

You have a great product, but no one’s buying.

I wanted to make this video go viral and figured out the best way to do it was to get the actual video on sites that already had eyeballs on them.

I began by writing to my friends in the local Santa Barbara media asking them to post the video on their local media sites.

I pointed out to them that this would be good for the audience.

Focusing on the audience is a principle that I learned from having my own show and writing for a bunch of magazines. You always need to focus on the audience. They are everything.

In this case it was two layers of audience

By demonstrating that I was focusing on the audience os the local media sites I was able to get my videos posted.

This raised the view count into the hundreds.

Lesson 1 – Focus on the audience/end user

My plan for getting on the local media sites worked well. However, when I began to reach out to the bigger sites I wasn’t even getting any response.

I knew I needed to update and change tactics based on my audience.

If the wouldn’t just post the videos, would they at least watch them?

I wrote to a couple of bigger sites as a test just asking them to watch the video. They watched the video and then posted it.

There was a lesson here: by lowering the initial commitment (watch the video instead of posting on their site), I started to get better end results (posting the video on their site).

I was only asking them to watch the video rather than to post the video.

It was all about that low barrier to entry ask and building that conversion momentum.

This is actually a really important lesson and one I try to teach every day. You can’t just go for that big initial scary ask. You have to build up to it.

This got my video thousands of views. 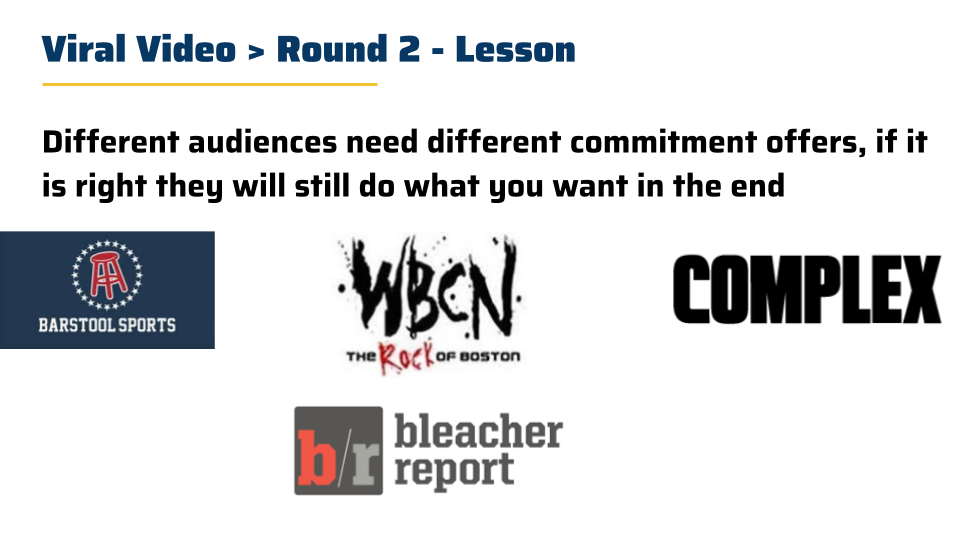 At some point I hit a brick wall.

I wanted to get this video onto the biggest venues.

I continued to try my tactic of just asking them to watch the video and got no response.

I kept lowering the threat level of the commitment until it I’d basically send them an email saying, “Hi, I have this video, would you be interested in it?”

Sometimes they wrote back and said, “Hey, I’m interested,”

We would then start to get to know each other a bit.

I stacked persuasion principles by

Those two tactics are how I got on the biggest sites like Sports Illustrated, and the Best Week Ever.

As a person starts to lower commitment and interact with you more, they’re more likely to know you, trust and eventually do what you want them to.

Lesson 3 – Combine the lower commitment ask with building a relationship 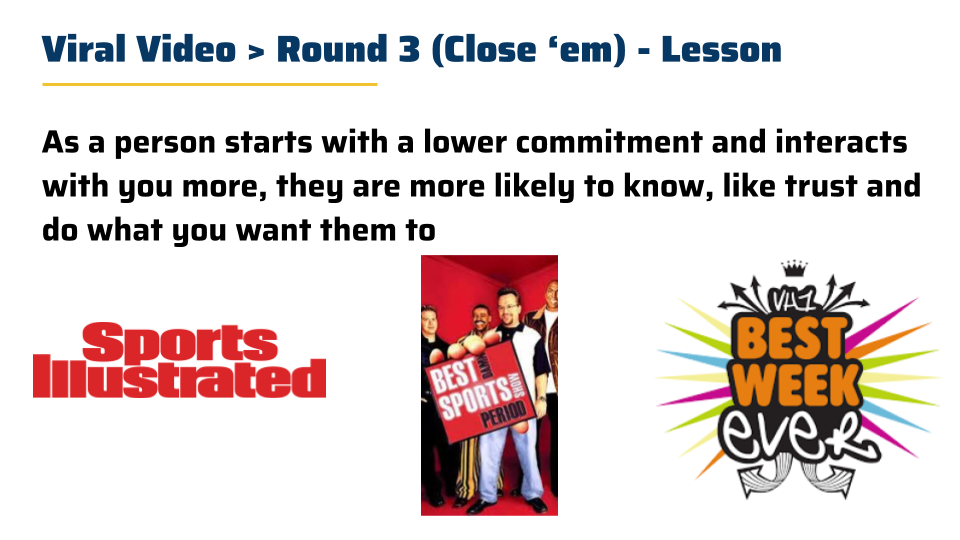 I used these two strategies, which were:

Before asking them to do the thing I ultimately wanted them to do got me featured on the biggest blogs and enabled me to land a new job.

Also, this is precisely how I get my clients and how my clients get their clients.

1: Figure out your core offer 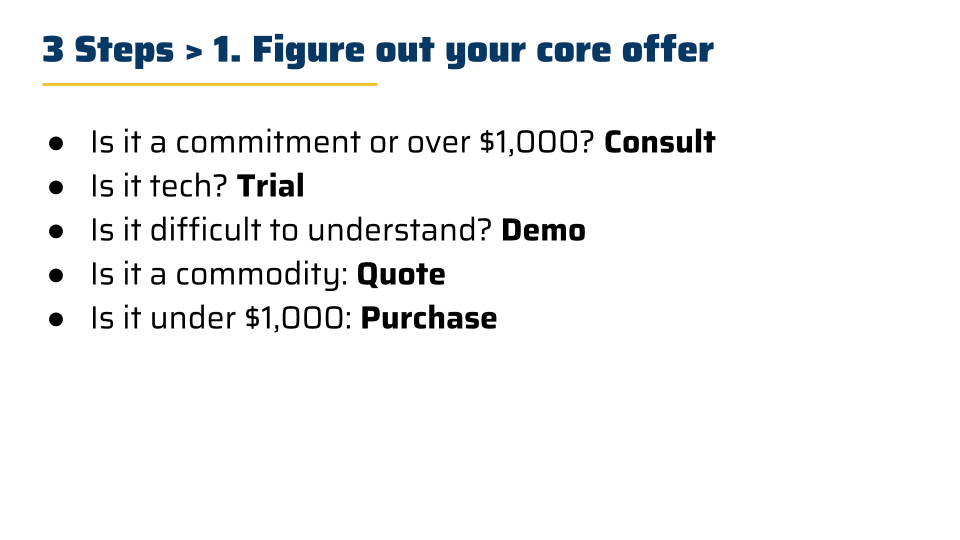 In the case of the viral video my core offer (what I really wanted some to do) was for them to post the video on their site.

In your case, your core offer is what you ultimately want your prospect to do online.

Here are some basic guidelines: 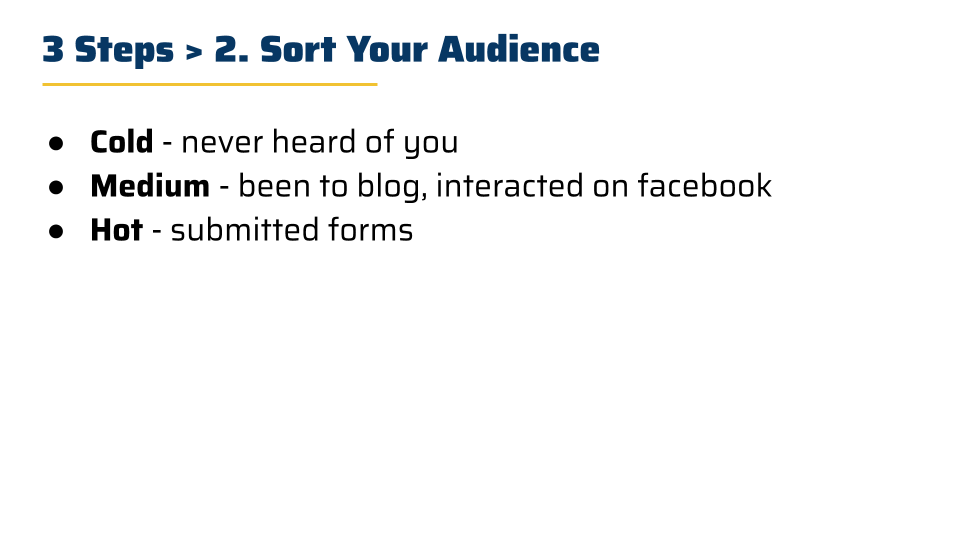 In the case of the viral video story I basically had three audiences:

In the same way for your marketing funnel you will want to sort your audience will be in 3 buckets:

You can have your audience go through a process and by the time they’re hot, making the sales is much easier

3: Match your audiences with the initial offer 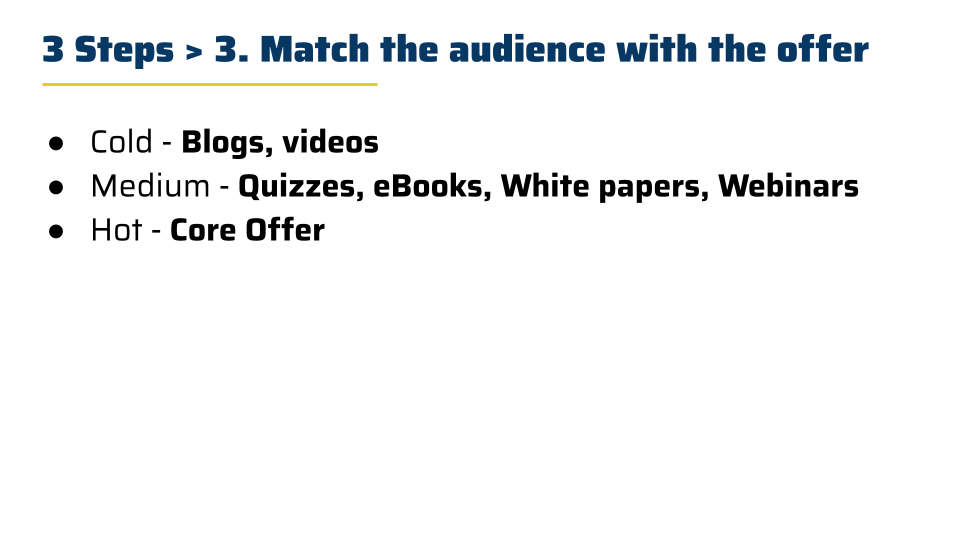 In the viral video story I had to change the offer to match the audience.

By moving these audiences along and building conversion momentum I eventually got them to post on their sites (or in the great cases be featured on their shows!)

You can do this in a variety of ways, but these are the ways that work the best:

You are going to hear a lot of no’s. You need to just keep on moving through. It can be hard to not take it personally, but remember they are saying no to your offer – not to you. The only way to win is to not give up.

5. Don’t try to sell before building a relationship

This is a lesson I had to learn the hard way. Honestly, I have had to learn it over and over. You can have the best product or service in the world, but if you just try to sell without building a relationship first you are done.

6. Match the offer not just to the person, but to where the person is at in relation to you

In short: success with any type of marketing is having the right offer, to the right person at the right time. More time than you will imagine involves creating these offers and finding these people. The actual presentation of the offer is the easy part.

Do you have a story of how you matched the offer with the right person? Please share your story in the link below…

If you are ready to get started with fast, cohesive strategy to achieve your goals schedule a consult with Nerds Do It Better today. 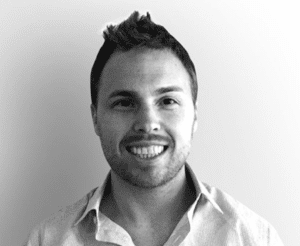 is the founder of Nerds Do It Better, an Internet advertising agency that delivers business results. He is (reformed) radio morning show host and has been featured in The Harvard Gazette, Search Engine Journal, PPC Hero, Certified Knowledge, KISSmetrics, Mtv, Vh1, Sports Illustrated, and Moz. He is highly active on social media and loves to talk business